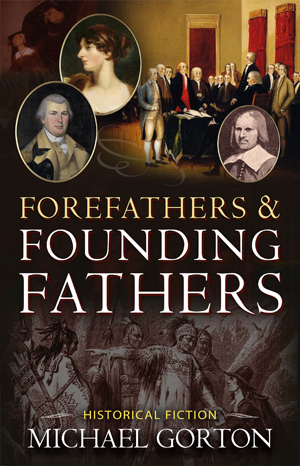 OR VISIT THESE RETAILERS:

A Historic Adventure Through the Creation of Our Nation

As an 11th generation descendant of Samuel Gorton, one of the founders of Rhode Island, Michael Gorton has successfully unearthed an incredible piece of America’s past. Forefathers & Founding Fathers is an adventure, a love story, and a tale of great persistence that chronicles those 17th century patriots who fought to create the template for America.

In the early colonies, America was on the precipice of becoming an autocratic theocracy. The battle for democracy and equal rights was sparked by a few characters, who nearly became lost pieces of history.

Forefathers & Founding Fathers is a tale that every American should know and yet most do not. Travel back to 1620s London, where hardworking and creative Samuel met Mary, a unique and highly educated woman. Their journey would lead them to the colonies, where they were ostracized and sentenced to death for introducing the fundamental principles modern Americans hold dear.

From Puritanism to the Great Migration and even covering the concept of antinomianism, this book will enlighten readers, educators, and students to an aspect of history that’s not been widely distributed.

The publisher, Brown Books Publishing Group (BBPG), has also conceptualized a new genre in connection with the release of Forefathers & Founding Fathers. Living History focuses on true stories from significant periods in history, as shared by the author’s ancestors; titles in the genre will equip educators with factual, riveting narratives that improve students’ understanding and engagement.

The expanded second edition of Forefathers & Founding Fathers exemplifies the Living History category by revealing impactful figures and providing a deeper perspective on their sacrifices and devotion to this country. Discover the compelling, brave tale that was once almost forgotten by much of America.


What People Are Saying ...

"Forefathers & Founding Fathers vibrates with wisdom and insights. I look forward to the movie!"
— Mark Victor Hansen | #1-Selling Author, Chicken Soup for the Soul and The One Minute Millionaire

"Michael shows us that we owe a debt of gratitude to many people we had not known before."
— Jim Stovall | Best-selling Author, The Ultimate Gift

"Brilliant! Intoxicating! I found myself absorbed in the relationships, the politics, and the struggles. Much more than a history lesson—it is a collection of leadership portraits that shaped our nation’s destiny."
— General Rebecca Halstead (ret.) | Author and inspirational speaker

"An amazing historical account that defies everything we know about the beginning of America, including our Thanksgiving feast with the pilgrims. It leaves the reader wondering what else we are in the dark about."
— Marla Conn | Founder, Readability Inc.